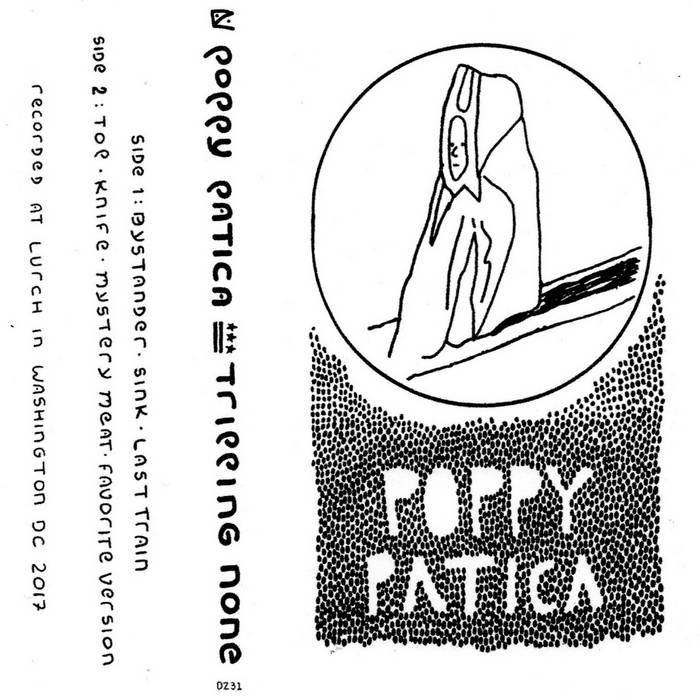 Peter Hartmann's POPPY PATICA started as one-person show with just a solo guitar, kick, and hi-hat. Now years later, the vibrant recordings laid down on Tripping None, his debut release, flourish in the listening mind like a field of flowers in full bloom, featuring appearances from members of DC's finest active bands like Flasher, Swings, Bless, and Big Hush.

The album combines the sounds of more recent experimental pop with those of 80’s pop and punk, the end result being seven tracks about being on the cusp of something; knowing what you believe, but not being sure if you’re ready to do the right thing about it.

all tapes come with free digital download, but you can get mp3s here:
poppypatica.bandcamp.com/album/tripping-none-2

"Melody drives Peter Hartmann. And Tripping None, the first proper release of Hartmann's solo project Poppy Patica has no shortage of shimmering, cosmic pop melodies. But while the EP—out today on local label DZ Tapes—might be drenched in bright melodies, there are also experimental pop sensibilities that keep listeners on their toes." - Washington City Paper

""Bystander" is a song that thrives off static, as if the plug on the amp were wriggling loose and filling the track’s nooks and crannies with crinkling white noise. If we could trace our fingers along the melody, we may just feel that quick electric shock against our skin, adding a little Einsteinian volume to our hair. It’s an enrapturing case of coloring outside the lines that’s true to Poppy Patica’s style, and only he can pull it off quite so seamlessly." - ThrdCoast

"From the heart-twinging chord changes on “Sink” to the lo-fi buzz of “Top”, this release modernizes some of the best elements of 90's indie pop, and the result is truly wonderful. A great debut from DC's Poppy Patica." - The Deli Magazine

songs written by Peter Hartmann, with accompanying parts written by all listed above
lyrics to "Sink" co-written by Hadas Binyamini

Guest hosted by Tamar Osbourn aka Collocutor and Toshio Matsuura.